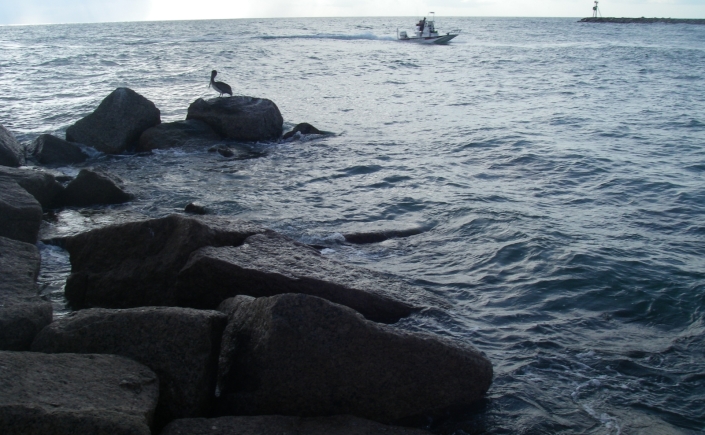 The wind stayed at about 10 – 15 MPH – Maybe a bit more than that! The morning winds were lower and increased as the day progressed.  On Saturday, the wind may have had gusts up to 20 MPH as we watched a thunderstorm just offshore pass by.  I am not sure what the air temperature was, but it wasn’t too hot with the nice Gulf breeze. As far as rain, we didn’t get any at the jetties except for about 5 minutes of light rain about 6:30 AM Sunday morning.

Driving was good until we arrived at about the 10-mile marker and then progressively got worse. Driving was rough all the way down to the jetties, but it could have been much worse. All in all, it was about a 2.5-hour drive from the entrance to the jetties.

On Friday night, it was kind of a “fend for yourself” type of meal as was lunch and breakfast. Ray Russ did share some of his breakfast with others, which I believe was venison links wrapped in tortillas. The “fattening” came on Saturday night when we had grilled shrimp tacos, boiled shrimp, and more of Ray’s venison sausage!

There were several species of fish caught including numerous skipjack up to 24”, small jack crevalle, a handful of speckled trout, redfish, and flounder – Mostly small. Also, one 20” snook was caught from the jetty. Oh, almost all of us  caught turtles if that counts! LOL!

Our trip began with much anticipation and excitement as it always does when most take a trip down the Padre Island National Seashore (PINS). We began by following the caravan of fly fishers, but after a while, we decided to skip ahead of everyone. The plan was not to intentionally leave the group, but to skip ahead a couple of miles or so until we saw something worth getting out and getting wet for.  As many know, you kind of lose your sense of space and time once you on the beach, which is what happened to us. By the time we saw some bird action that we felt worthy enough to try, we had already traveled too far down the beach to contact anyone on the radio. Anyway, we caught several small skipjack in that spot at about the 20 mm. We fished for about 45 minutes and decided to leave them be. Assuming the surf was too rough and unfavorable for schooling jacks, we contemplated the idea of driving down to the jetties and setting up. We assumed but were wrong, that the other group would catch up and camp there. By the time we got to the turtle shack, we decided to just go on ahead and make the journey all the way down where there were more fishing options available. We did pass several deep holes up against the beach that could have produced past the 40, but we passed them for the jetties.

Skipjack in the 20 – 25” range, were busting bait at the mouth of the jetties on the channel side. It was non-stop action all day long on both days we were there. The young guys out there fly fishing for tarpon told me they have not seen any tarpon at all rolling. We did hear of a school of jacks that came outside of a fly casters range and we saw someone catch a bullred. David Mihalov caught a 20” snook from the jetties almost in the surf.

Speckled trout, flounder and redfish were caught by wading in the channel down from the base of the jetties. However, most were small.

All in all, it was a fun trip! Some of those skipjack got our 8 weights down into the backing. Any fish that can do that, gets my respect! Also, not every day does someone you know catch a snook. Wow! I can’t wait to go back!

May and June Events

May 26:  TFF Monthly mtg – Virtual Meeting. Details will be provided via email blast