Campers showed up at 1430 on Friday afternoon.  The weather was decent and fish were caught.   5 campers decided to brave the weather.

Grill was started about 1730, and dinner was a combination of deer chili, cheese with crackers, jambalaya, baked potatoes with dressings, bratwurst, chased with red wine.

Fran, John, Don, Scott, and Puck continued to fish until dark, then sat around the campfire until about 2230, when Fran, John, and Matt decided that this would be the time to catch (CPR) bullfrogs.

The drizzle that we got during the night barely wet the ground, the wind had died, and the air was warm as we woke.  The slight breeze waas coming from the south, just enough to keep the vampires from flying, not enough to interfere with casting.

At 0400 the next morning Puck was feeding the fire and working on coals to cook breakfast.  At 0500 you could hear him swearing at a missed strike.  A large LMB had hit the popper 4 times with no hook-up.

0600 Matt had his coffee in hand, gates were opened, and the day began.

For the campers, breakfast was biscotti, sweet rolls, leftover brats and potatoes wrapped in cheese and stuffed into a warmed tortilla.  Downed with coffee, the campers were ready to start their day.

As Joe and Russell sat down at the sign-in station, at about 0630, they needed a fan to keep cool.  The temperature was warm (mid-70s) and the air humid.

The staging point seemed to be the picnic/camping area.  Folks would sign in at the gate, and gather at the tables to talk and drink their coffee.

It wasn’t long and our fly fishers started catching fish.  The fishing was slow, but they were biting.

At about 0900, the wind shifted, coming out of the north and causing the temperature to start dropping.

Matt and Thomas brought up the cowboy grill, and the charcoal was lit.  An aluminum boat was dragged into place to use as a windbreak.

By 1000, John and Thomas had erected tarps on the end of the picnic area in an effort to block some of the wind.

I have never seen a bass tail like a redfish until this weekend.  Here is the video:

One of our group had the misfortune of locking his keys, and his dog, in his 4WD.  Thought of smashing windows, and calling a locksmith obviously crossed his mind.  Fortunately, he had a spare set and home, and was able to borrow a vehicle to go get them.

Now considering that the keys in 4WD was a major topic of discussion during lunch, this may be considered a lesson learned by all.  Not so!  Keys in the truck, and unable to reach the buttons with a fly rod, another angler’s day was quickly taking a turn for the worst.  To the rescue comes a grandkid, able to slide between the slightly rolled down back window and the roof, and smart enough to know what button to push.

Fishing from a kickboat is a stealthy way to fish.  You learn a few tricks on line control, hook sets, and others.  A trick that a lot of us use for a hookset is to kick hard backwards and set the hook at the same time.  This trick backfired on one of our anglers,  He kicked backwards and the back of his jacket caught the water.  When he was upright that cold water crawled down his back, and into his waders, cooling him quickly.   He never did recover the body heat, and left right after lunch in an attempt to warm up.

Bob’s GD catching a fish on the fly.  Here is the video:

Temperature dropped to 46°F making the mist coming off the water take on a whole new meaning.

Lunch was served.  All anglers made their way to the picnic area as Laura and Rudy manned the grills.  Burgers went fast, with a few hot dogs disappearing.

MFQ and others helped clean up after lunch and a few went back to fishing.

With the temperature drop, high winds, low catch rate, our anglers started leaving just after lunch.  The last record of somebody on the water was about 1830.

And here we have a selection of photos from the event:

Smoke on the water 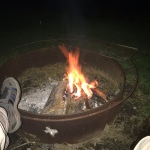 How big is the hand, eight and change, Kurt

6 and a half inch bluegill

Nice bluegill, but not quick as large as the winner

Just how long is this fish, nine and a half inches, Kurt

More smoke on the water

Angel shows how it is done

Not as long as the handle

Eight and a half

Eight and a half, nice