Back in February I spent a week in New Zealand and split my time between both salt and freshwater. Whilst everyone is familiar with the trout in NZ, not many people know that there is also a fantastic shallow water flats fishery there. We were in a place called Golden Bay, which sits at the top end of the South Island. Each summer as the water warms, huge stingrays cruise the flats (think car hood sized, not the little texas ones). Following the sting rays come yellow tailed kingfish looking to eat what ever the rays stir up. Normally a deepwater species, kingfish are a member of the jack family and fight just like the rest of them. All fishing is on foot and in water from knee to chest deep. The sting rays can be seen from far away as they are jet black and then its just a question of running through the water to get close enough to cast at one to see if there are kings following. They will hit streamers and top water and  fight like demons! The weather was a mixed bag and really affected the trout fishing – will post the trout pics when I get them. Enjoy! Fishing was organized through the excellent aussieflyfisher.com 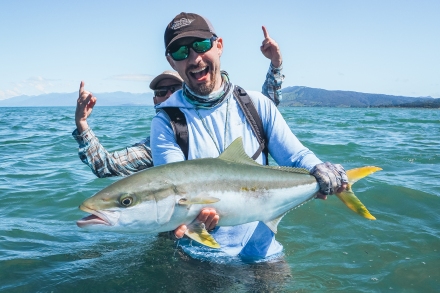 Sept 29: Monthly meeting via ZOOM  (Details to be email blast)

Oct 27: Monthly meeting via ZOOM (Details to be email blast)