Fish were caught.  11 of us made it to the water.  Fun was had by all, but if you want to know the details……

TFF members began arriving at about 0630 Friday morning at the boat ramp.  I counted 8 of us on the water before noon.

There was one bass boat on Friday that either didn’t understand, or didn’t care, about the “no wake” policy on Lake Raven.  He was educated later by the rangers.

The LMBs (large-mouth bass) seemed to hit the larger flies, frogs, poppers, etc. but there were a few larger fish caught on smaller flies.

Camp was set up around noon or so, with 4 campers staying Friday night.  Nothing says camping in Texas as well as seeing folks having a fan on them as they sit around a campfire.

All of the shelters were reserved for this weekend with families scattered throughout the park.   Geocachers, hikers, loungers, and the occasional family fishing could be seen all across the State Park.

An early dinner of bratwurst, pasta salad, beans, and more, allowed the anglers to get back on the water for the evening bite.  Head chef for Friday was John.

Topwater flies elicited the most exciting strikes. But a lot of fish were caught on subsurface flies.

The weather held for the entire weekend with the occasional sprinkle, just cooling down the air, without drenching anything.

Saturday morning started early with coffee in hand by 0600.  Breakfast was “eat what you brought”.

We had a different set of anglers, with 7 of us scattered over the lake.

Around 1100, there seemed to be a “plastic hatch” as all of the parks kayaks and canoes were rented and on the water at the same time.  This had very little impact on the fishing, as the lake still didn’t feel crowded.

Another early dinner for Saturday.  Saturday night’s meal was a wonderful dutch oven lasagna.  Head chef for Saturday was Patti, with Loretta assisting.

More fishing after dinner, but before dark.

Sunday morning started at about 0630 with coffee and then a leisurely breakfast with packing and cleaning camp taking only a few minutes,a s we kept sitting down at the fire to tell stories. 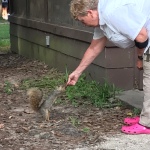 John casting to a pad of lilies

John casting to a pad of lilies

Another LMB takes the fly

Another LMB takes the c-ant

Only a few other anglers on the water

Mary-Kay and Steve at the launch