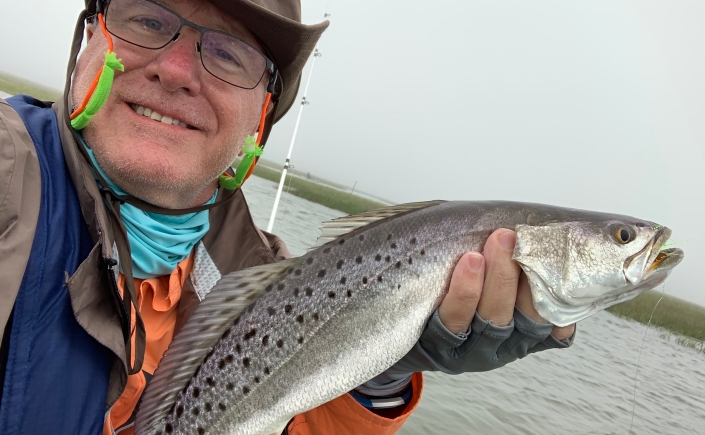 Food was prepared and shared by all.

Good times were had

Speckled trout on the fly, JE

Flounder on a fly, JE

Fog at the launch

Speckled trout on a fly tied the night before.

Fog at the launch 2

The wind was blowing at about 10+ mph, and it was overcast.  Temperature was high 60s.

One intrepid angler was on the water all afternoon and caught fish.

9 of the others arrived at camp right at 1500, with the angler and one other showing up just as dinner was talked about

Dinner was food, and more food.  All were stuffed as we sat outside and swapped stories or tied flies at the kitchen table.

11 campers, and all were present the first night.

0700 Convoy to the launch at Stingeree.

0720 Launching of 1 skiff, 1 john boat, and 9 kayaks took a bit of time but even with the heavy fog, there were no problems getting on the water.  Air temperature was in the high 50s at this time.  Gnats and vampires were still active because of the fog, and light winds.

0830 All were on the water with a few venturing over to Yates, despite the low visibility.  The rest fished the west marsh with one brave soul exploring the east marsh later in the day.

0845 John boat motor refused to run.  He anchored and fished for a while before calling it an early day.

1000 Chris came by in his micro-skiff, inquiring about the fishing.  I didn’t get a report from him, so don’t know how he did.

1900  Dinner was even more food than the night before.  With all pitching in, cooking and clean-up took almost no time.

0600 Cooks started breakfast and anglers started moving.  The weather was triple checked before the call to hit the water was made.  The threat of storms kept us on edge the entire time.

0700 Convoy to the launch at Stingeree.  The weather looked to cooperate.

0720 Two of the anglers chose to head home.  There was a rental kayak to return, and the weather had not improved.  Foggy and windy, as it was on Friday.

0830 Nine anglers on 7 kayaks and two on the skiff went out in the quest for fish.

Two more left camp before dinner, leaving 7 of us to try to finish the food left.  The unanimous decision to not have a fish fry was probably a saving factor for our sanity.  Leftovers, and a lot of them, were the menu.

By 0700, the weather had not changed, so none of the remaining 7 chose to fish.

Cleanup and packing, after another fantastic breakfast, took a very short time.