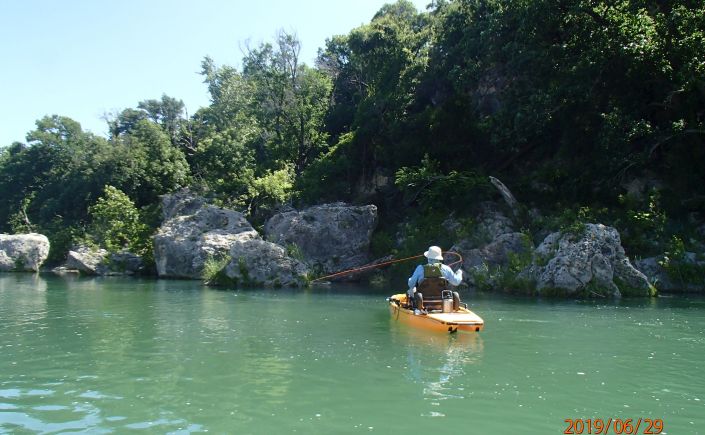 The Texas FlyFishers Began arriving at camp at about 1300.

One swimmer. One pair of shoes are now “sole-less”. One pair of wading boots gave up the ghost. Only one fly rod snapped, but amazingly, it went back together.

Fish were caught, but the numbers were lower than last year.  We are blaming the flood.

Lodging was a special treat. The facilities were clean, and well laid out.  The area near the water was the best place to hang out.

We started by wade fishing around the take-out point, and there were a few fish caught.

Friday night’s “bratwurst” turned out to be, bratwurst, hamburgers, chips, and more.  Cooked most of it outside, but served from inside cabin #1, and eaten by the fire.

Saturday morning, Larry Mc. had a breakfast casserole ready for the gang, and we all invaded cabin #2, sitting at the large table and enjoying coffee as breakfast was devoured.

On Saturday morning, after a rather leisurely breakfast, between Ken’s trailer,Puck’s rig, and everybody pitching in, we were on the water and fishing by 0745.

With the water levels a few inches higher than last year the travel downstream was very easy.

We only had 4½ miles to cover so there was plenty of time to thoroughly fish our favorite spots.  The GPS reader didn’t bring his reading glasses and couldn’t tell the “distance to go” from the “map scale”, leading to a bit of confusion.

By about 1400, the pleasure traffic started, with family, swimmers and day drinkers sharing the water.  It is a good thing we started early, getting ahead of the crowd.

Reserved for next year, 2020, already, with the dates the weekend after Father’s Day, but will talk to the Outings Chair about moving it back one week.

Guadelupe Bass on the fly (1)

Richard and Steve fishing the seams (1)

Guadalupe Bass on the fly (5)

Bear and Glen take a break at the takeout, Bon Ton Roulet Cabins (3)

Ken fishing at the takeout at Bon Ton Roulet Cabins (1)

The takout at Bon Ton Roulet Cabins, from upstream (1)

Richard at the rocks (1)

Larry and Steve headed out after a shore lunch (1)

A long flat stretch of the South Llano River Float (1)

Bear and Ken take a break at the takeout, Bon Ton Roulet Cabins (1)

South Llano River in the morning (1)

Robert fishing a nice stretch on the South Llano River (1)

Another view of the takeout at Bon Ton Roulet Cabins (1)

Richard and Robert concentrate on the rocks (1)

Larry lands a nice Guadelupe bass on the fly (1)